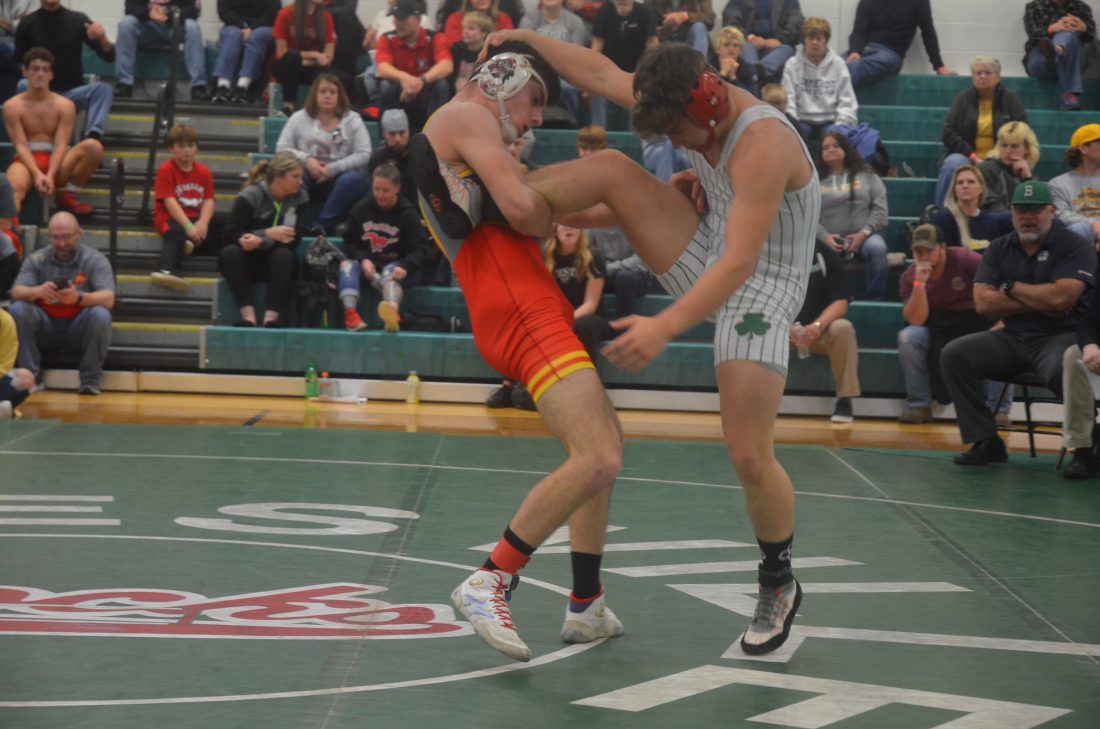 BARNESVILLE — For the second consecutive week, Barnesville let a lead entering the final round slip away and ended up settling for second place.

Saturday at the Barnesville Doan Ford Invitational wrestling tournament, the Shamrocks held a slim, 163-160.5, advantage over Teays Valley, but the Vikings recorded victories in two of the final three weight classes to claim a 189.5-187 nod. Barnesville was runnerup at the Union Local Rick Link Invitational last Saturday after a disappointing final round.

Teays Valley 285-pounder Joey Thurston provided the winning points with a pin in the final match of the event.

Barnesville fared better in the championship finals this time around, going 4-for-6, but it still wasn’t enough even though all four Shamrock titlists recorded pins.

“We had a better weekend than we did last week,” Barnesville head coach Jayson Stephen allowed. “I think the competition was a lot stiffer here. There were a lot of good matches.ã

“We had two more champs today than last week, but there were a couple of weight classes where I thought we could get in the top 6 and didn’t,” the coach said. “Reese and Dakota did what they had to do and Griffen is wrestling like a cinder block right now. Skyler wrestled a great match. That was a rematch of the (Div. III) District finals last season.”

Karson Milhoan (157) was the other Shamrock to earn a top-6 finish.

“C.J., Dom and Reese have all been wrestling well. We got off to a slow start and don’t have very many matches, but we’ve spent a lot of time in the practice room,” Indian Creek head coach Brandon Pendleton said. “Alll three of those guys had great tournaments.”

The Redskins, who finished in a tie for fourth with River Valley, had three other wrestlers reach the podium.

“We’re glad to have him,” Cameron head coach Tim Brown said of Angel. âHe put together a good tournament, especially today when he was really focused.”

The Dragons also had a runnerup in WVU recruit Ian Bush (190). The defending OVAC and W.Va. Class A-AA state champion, dropped a 6-4 tiebreaker to Teays Valley’s Camden McDaniel, who was voted the Most Outstanding Wrestler by tournament coaches and is a Fargo National champion.

Cameron had one other placer.

The Monarchs also had eight other individuals earn places as they finished third with 148 points.

Bellaire also had a placer.

Other champions were Teays Valleyás Gunner Havens (106) and River Valleyás Aiden Greene (215). Havens earned the Peck Award for Most Pins in the championship bracket in the least amount of time. All four of his wins came by first-period pins, including a pair under 20 seconds.

Today’s breaking news and more in your inbox