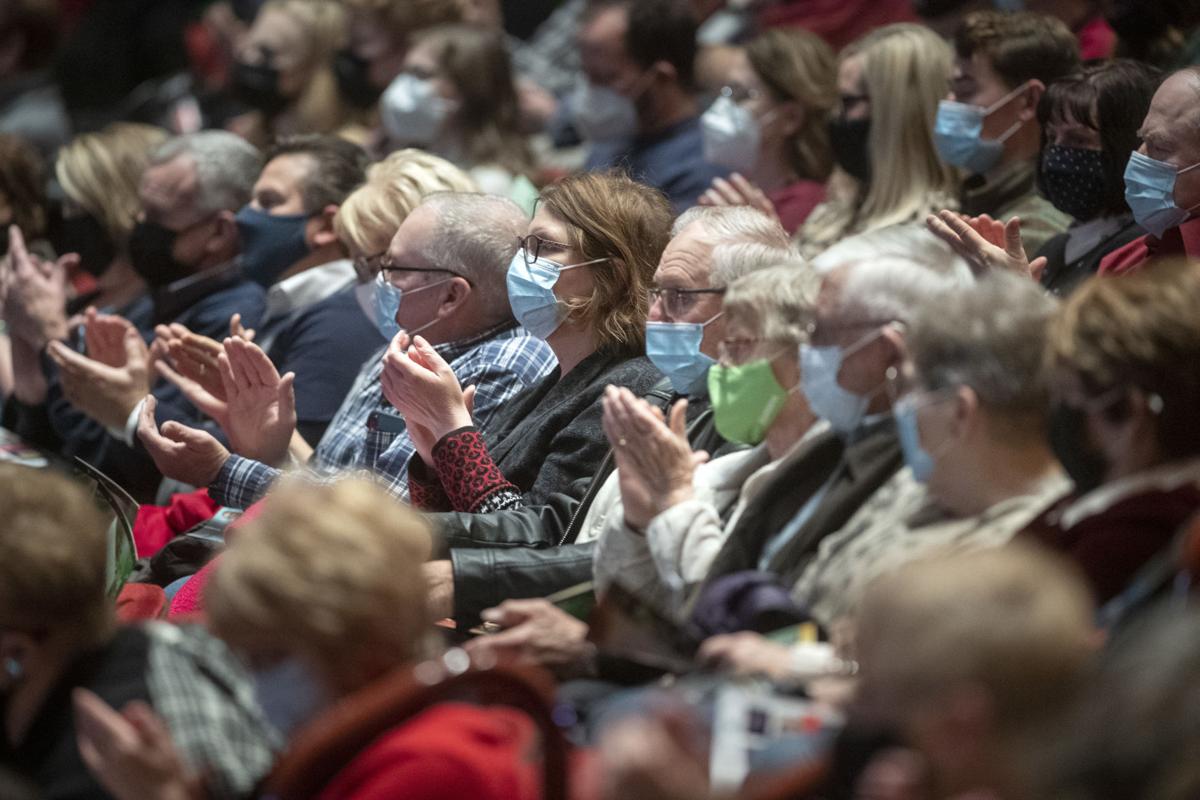 Masks are prevalent among audience members at Tuesday’s Mannheim Steamroller show at the Lied Center for Performing Arts. 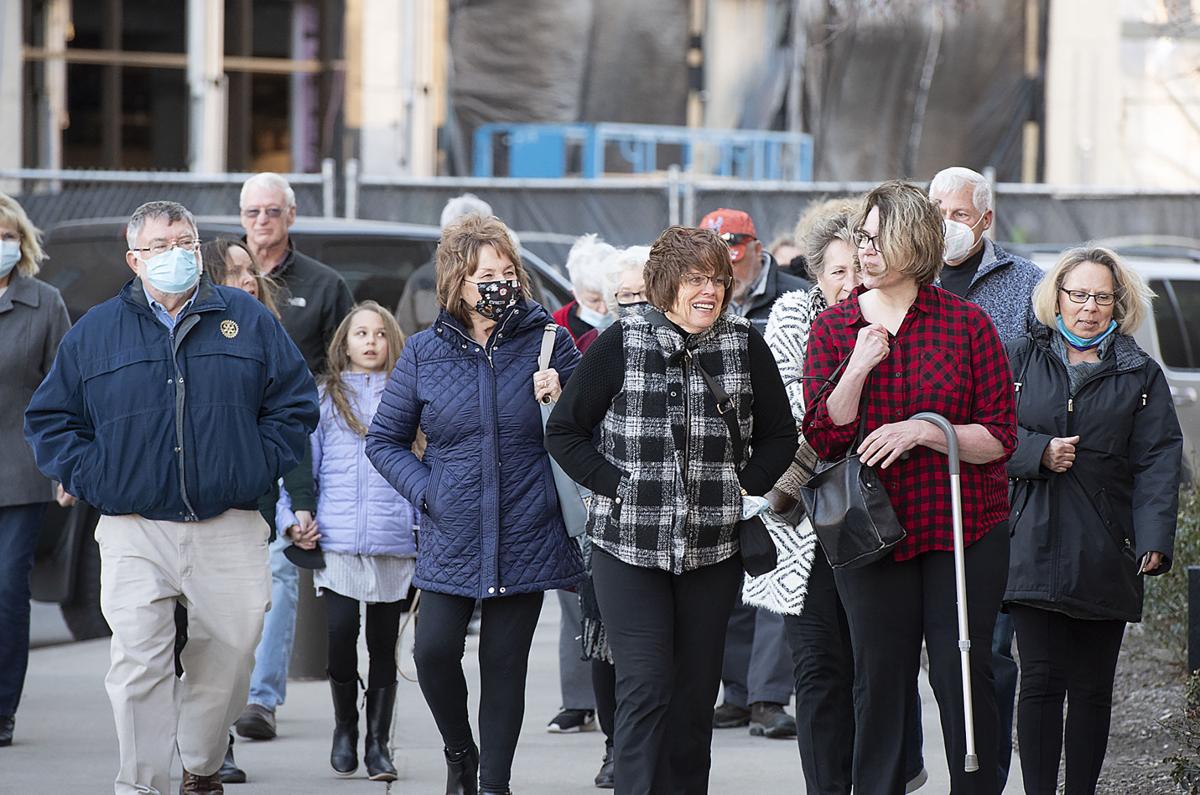 People with and without masks walk to the Lied Center for the Mannheim Steamroller show on Tuesday. 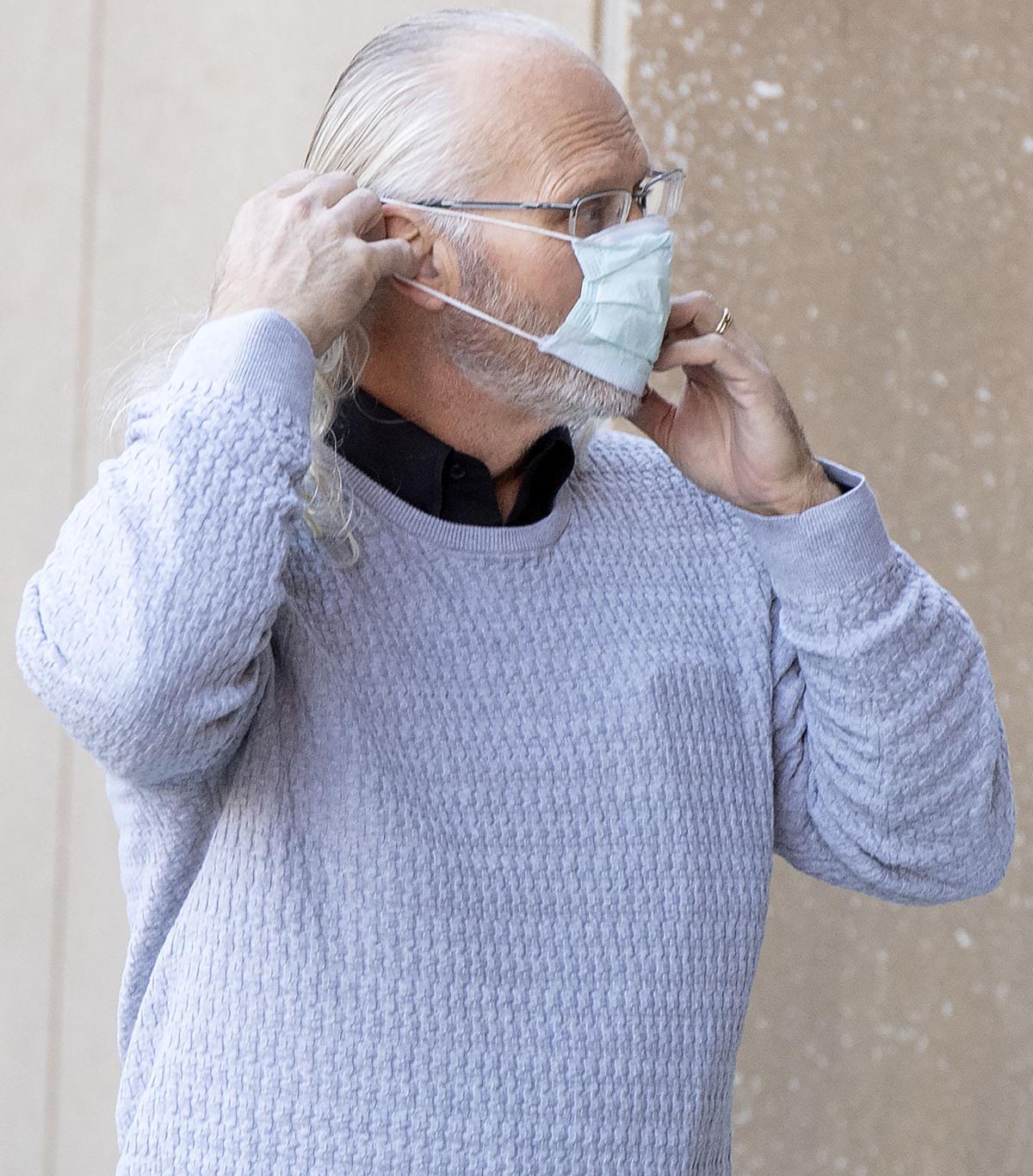 Keith Bowder adjusts his mask as he heads into the Lied Center for the Mannheim Steamroller show on Tuesday.

On the same day Lancaster County officials announced the first confirmed local case of the COVID-19 omicron variant, they said they will be dropping the countywide mask mandate.

In their weekly coronavirus briefing, Mayor Leirion Gaylor Baird and Health Director Pat Lopez referenced the availability of vaccines to everyone ages 5 and older and booster shots as the underlying rationale for allowing the directed health measure to expire at the end of the day Thursday and just before the holiday weekend.

But Dr. James Lawler, co-executive director of the University of Nebraska Medical Center’s Global Center for Health Security, said now is not the time to be easing restrictions, especially with the arrival of the omicron variant and the beginning of flu season.

“I can’t think of worse timing,” he said.

More than 203,000 Lancaster County residents are fully vaccinated, which represents nearly 64% of the total population, and another 15,000 have at least one dose. Gaylor Baird said more than 84,000 Lancaster County residents also have gotten booster shots, and with the omicron variant spreading, she and Lopez urged those eligible to get the vaccine.

Lancaster County reinstated its mask mandate in late August in the face of rising cases due to the delta variant and was the only city or county in the state — and one of few in the region — to require masks in indoor settings over the past four months.

That led to criticism both from people who felt there shouldn’t be a mask mandate and from supporters of the mandate who didn’t feel it was being enforced.

However, Lopez said neither fatigue over wearing masks nor issues with enforcement played into the decision to end the mandate.

Instead, she said the county has made “critical progress” over the past year in battling the virus, helped largely by the vaccine.

“We are currently equipped with more tools and treatment options than before, and we are using them to reduce the spread of the virus and its variants,” she said.

Even with a mask mandate and high rates of vaccination, COVID-19 case numbers and hospitalizations rose throughout the fall in Lancaster County.

After hitting a high of more than 1,200 cases the week ending Dec. 4, the county has seen its case numbers decline slightly the past two weeks, to just more than 1,000 cases a week ago. However, that’s still one of the highest weekly totals of 2021.

On a daily basis, the rolling average number of cases declined from a high of 182 on Dec. 5 to 140 on Friday, but that drop may be temporary.

Lopez admitted that experience tells her, “we are likely to have another holiday bump at the end of this year,” thanks to school being out and families holding holiday gatherings.

Unlike case numbers, hospitalizations have risen recently, with Lincoln reaching a 2021 high of 129 COVID-19 patients Friday. That number dropped to 112 following the weekend, but climbed back to 126 on Tuesday.

The health department confirmed the death of a woman in her 80s who was hospitalized and unvaccinated, the 346th victim of COVID-19 in the county.

Hospitalizations of late have been driven by the delta variant, and it’s unclear what the effect of the omicron variant will be. While it’s more transmissible, some preliminary studies have shown it may cause milder cases.

Until Tuesday, there had been seven cases of omicron detected in the state, all in the Public Health Solutions district in Southeast Nebraska.

However, in addition to the case in Lancaster County announced Tuesday, Douglas County said it confirmed 10 cases in people ranging in age from 5 to 56.

Lopez said health officials are “actively investigating” the local case, and she had no further details.

Because of its number of mutations, vaccines do not work as well against omicron, although studies have shown booster shots provide a significant level of protection.

Gaylor Baird said she had some advice for people who are fully vaccinated but not yet boosted: “Get in for your booster now.”

Even with the end of the mandate, masks will still be required in some places, including hospitals, health care facilities and senior living centers, on public transportation and in the Lincoln Airport terminal.

Lopez said the county Health Department will strongly recommend that masks be worn in schools and at sporting events, theaters and other settings where people are seated close together.

She also said that some private businesses may institute their own mask mandates, and “they are within their rights to require this without a mandate from the county.”

And she said allowing the expiration of the mask mandate now does not preclude the county from reinstating it again if conditions warrant.

Dr. Bob Rauner, president of the Partnership for a Healthy Lincoln, said he disagreed with the timing of the decision, noting that because of the transmissibility of omicron, much of the rest of the world is adding mask mandates and other protective measures.

“Looks like Lincoln no longer has the political will to do the same,” he said.

Unlike in other jurisdictions in Nebraska, elected officials in Lincoln and Lancaster County have not had to vote to implement mask mandates.

Because of a quirk in state law, the Lincoln-Lancaster County Health Department could issue restrictions on its own, something other health districts couldn’t do.

However, neither Gaylor Baird, nor majorities of the City Council or County Board, have raised issues regarding the masking rules. But without the directed health measure, decisions over masks in schools, for example, could shift to school boards.

Rauner, who also is a member of the Lincoln Board of Education, said he’s worried that Lincoln hospitals could start to be overwhelmed after the holidays.

“I hope I’m wrong, but there is a good chance we’ll see crisis standards of care in January,” he said. “Anyone on the fence about getting vaccinated needs to do so as soon as possible.”

In a statement, Lincoln Public Schools officials said they will announce any changes to the district’s pandemic protocols for the second semester Wednesday, the last day of classes before the holiday break.

Classes in LPS are set to resume Jan. 5.

The University of Nebraska-Lincoln will make a decision on its COVID-19 policies and procedures before the start of the spring semester Jan. 18, spokeswoman Deb Fiddelke said.

Sign up now to get the most recent coronavirus headlines and other important local and national news sent to your email inbox daily.