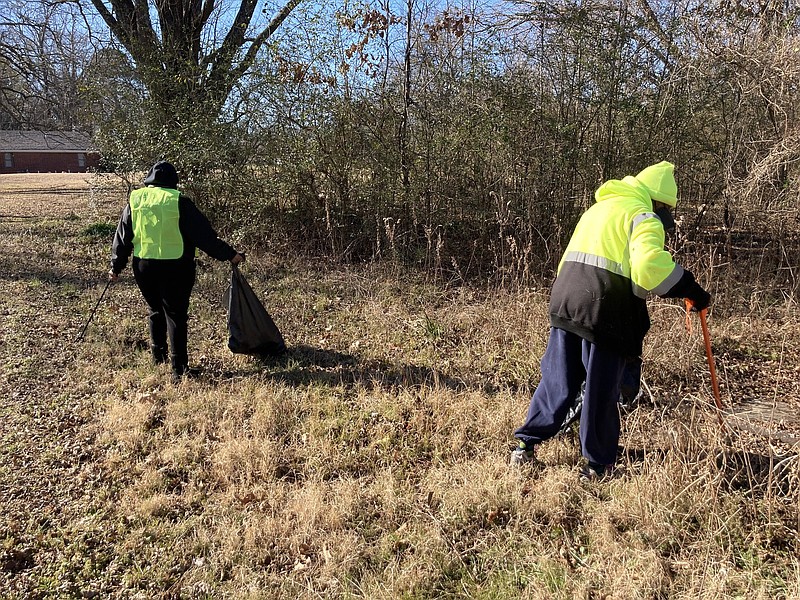 Almost 60 volunteers turned out on a cool Saturday morning to pick up litter and debris around Pine Bluff.

The turnout was a bit less than what it has been but tons better than an October outing that collided with UAPB homecoming activities.

“We are very pleased with the turnout,” said William Fells, assistant to Mayor Shirley Washington and the litter pick-up organizer. “We are particularly happy to see so many people from so many organizations that we haven’t seen in a long time.”

Participants gathered in the Coretta Scott King Center at Martin Luther King Jr. Park at 8 a.m. and loaded up with trash bags and other supplies and then headed out to appointed areas around town. The activities ended at noon, when Waste Management trucks began making the rounds to pick up what the volunteers had collected, Fells said.

ONLY ON A LARGER SCALE

Mayor Washington likens a tidy city to keeping one’s own house in order and presentable.

Since taking office in January 2017, a litter-free city has been a priority of Washington’s administration and the city holds three to four major cleanups each year.

Last year, they had two of their own events, and participated in a Fourth Ward cleanup with the Pine Bluff Code Enforcement Department.

“So, that was in line with our usual goal,” said Fells, the city’s special projects coordinator.

Washington’s office has held about 20 cleanups to date and the number of people volunteering at each event has grown from about 40 to more than 100 at times.

“She (Washington) is committed to a clean and healthy city, so combating litter is a natural part of it,” Fells said.

Waste Management at Pine Bluff partnered with the city on this event, supplying trucks, dumpsters and drivers, as well as adjusting their employee work hours, Fells said.

MORE THAN ONE DAY

Although part of his job, Fells takes a personal interest in this endeavor.

“I take it very seriously,” he said.

It’s more than just an occasional effort, he said.

“We need to instill a new mindset,” said Fells. “It’s not just one day but it’s every day.”

Each resident has a role to play, he said, adding that keeping yards, streets and neighborhoods clean is about pride of place.

It also influences the values of the upcoming generation and kids and adults feel better when living in a trash-free environment, he said.

When businesses and people consider moving into the city and see surface litter, Fells said, it adversely influences their decision to relocate to Pine Bluff.

The five-year-old program is starting to have an impact, and volunteers from the University of Arkansas at Pine Bluff are often the first ones to sign up for the cleanup, Fells said.

The coaches and professors there, he said, remind the students of their obligation to the local community whether a permanent resident or not.

As juvenile court judge, Brown took office about 14 years ago and at that time, he started the Juvenile Court Clean Team. Kids who end up in Brown’s courtroom often become part of the team as a condition of their probation, Brown said.

Under the guidance of the program’s director, the Rev. Glenn Barnes Sr., youthful offenders are sent to “public lands” to pick up trash and debris, Brown said.

The kids work Saturdays from 8 a.m. until noon and get credit that goes toward paying off their community service hours.

“I want them to realize the value of the beautification of the city. This benefits the kids. They often learn to take pride in their community,” Brown said.

IT TAKES A CITY

Washington is asking everyone to do their part, whether it’s volunteering for the cleanup day or not.

“It takes everybody to keep the city clean,” she said, suggesting that residents start at home by keeping their own property free of trash.

As well, there’s no reason to dump a used refrigerator or other large household items in empty lots, along the road, or leave it in the yard. She said put it at the curb on trash day and it will be picked up.

The city also has scheduled dumpsites where residents can dispose of the unwanted or discarded items.

Also, instead of tossing paper, cups and cigarette butts out the window, people should keep a litter bag in their vehicle.

“We want to get this city as clean as possible. It’s about true pride. It’s a reflection of all of us,” Washington said.