During an undisclosed evening in September, workers at Northrop Grumman, in Redondo Beach, loaded the James E. Webb Telescope into a transport trailer, and drove it 17 miles down Pacific Coast Highway to Seal Beach. From there, a cargo ship sailed the telescope to the European Space Agency’s launch site in Kourou, French Guiana.

On Christmas Day, $10 billion, and 19 years after the telescope was conceived, it was launched into orbit around the sun, one million miles from earth.

The Webb is 100 times more powerful, seven times the size, and half the weight of its predecessor, the Hubble Telescope. Webb’s first pictures will arrive back at Earth in six months. Scientists hope they will offer insights into the Big Bang. 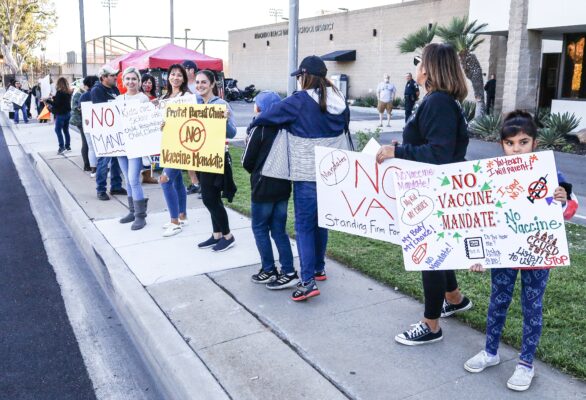 Redondo Beach parents protest against mandatory vaccinations during an October school board meeting, though mandatory vaccines are not required of students. Photo by Kevin Cody

Redondo Beach Unified School District returned to in-person learning for all grades at the start of the 2021-22 school year. Instruction had been mostly online since March 2020.

At the School Board’s final 2021 meeting, a group called RBUSD Parents For Transparency asked the district to go on record as opposed to any potential vaccine mandate.

Board members responded that the request was premature and “misplaced.”

“We have no vaccine mandate. We’ve never discussed one,” Board Member Dan Elder said. 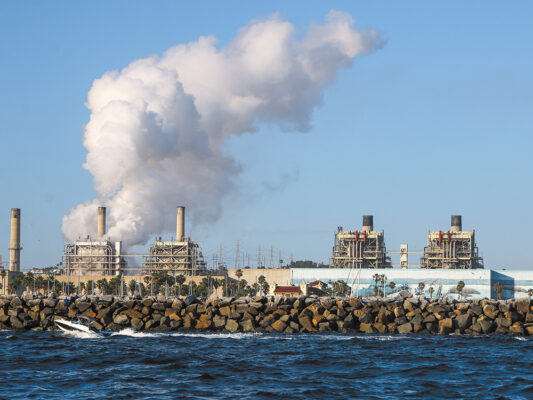 The Redondo Beach City Council is suing the state to speed up closure of the AES power plant.

The California State Water Resources Control Board voted Oct. 19 to extend the life of four gas-fired power plants along the Southern California coast, including the AES plant on Harbor Drive in Redondo Beach.

The AES operation was slated for retirement on Dec. 31, 2020. In extending the closure to Dec. 2023, the board contended the 67-year-old plant might be needed, based on shortages that arose during the August 2020 heat wave.

For over a decade, city officials have been anticipating a park and light development of the 51-acre site.

In late September, the council voted to sue the water board to block the plant’s extension.

“They absolutely set the table for more extensions,” Brand said after the decision. 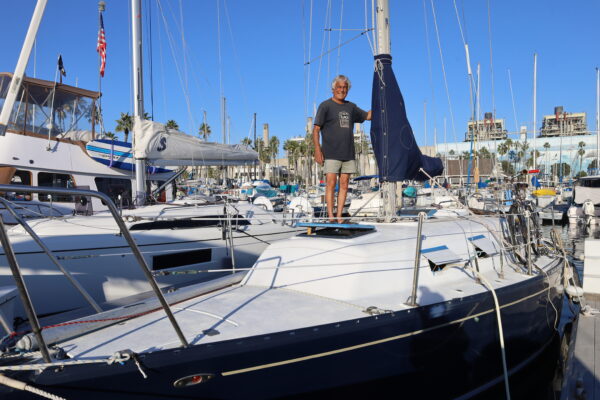 Rafael Fernandez, a retired architect, was among the King Harbor Marina liveaboards who feared they would be evicted. Photo by Kevin Cody.

In November, 65 King Harbor Marina boat live-aboard residents were told they would need to move within six months.

Boat owners who do not live-aboard quickly expressed support for the liveaboards, whom they said, offer security on the docks.

Within days of the notice, Mayor Bill Brand, City Councilman Todd Loewenstein, and newly appointed City Manager Mike Witzansky discussed the issue with marina lessee Dr. Allen Ginsberg. Gingsberg assumed the lease in February 2020 from the Guthrie family, who had owned the lease since 1971.

Following the discussions, the marina issued a statement that no evictions will happen “any time soon.”

Like other cities, statewide, Redondo is struggling to provide more affordable housing. 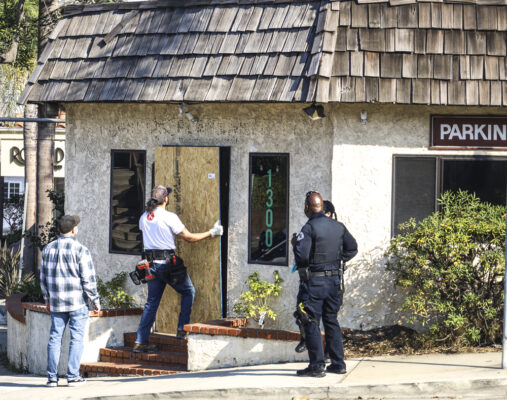 Pot store busts in Redondo, like this one last December, could be a thing of the past if voters legalize cannabis sales. Photo by Kevin Cody

In the fall, Catalyst Cannabis Co. co-founders Elliott Lewis and attorney Damian A. Martin hired a Los Angeles-based signature-gathering company, at a cost of $174,000, to gather the 5,500 signatures needed to qualify a November 2022 ballot measure that would allow retail cannabis sales in Redondo Beach.

In December, Martin presented 6,605 signatures to the city clerk.

The signature-gathering triggered a police investigation into allegations that prospective signers were misled. Martin denied the allegations, and countered that his signature gatherers were harassed.

In October, the city council reviewed a list of recommendations from its Cannabis Steering Committee. If approved, retail sales could be allowed, potentially making the ballot measure unnecessary. 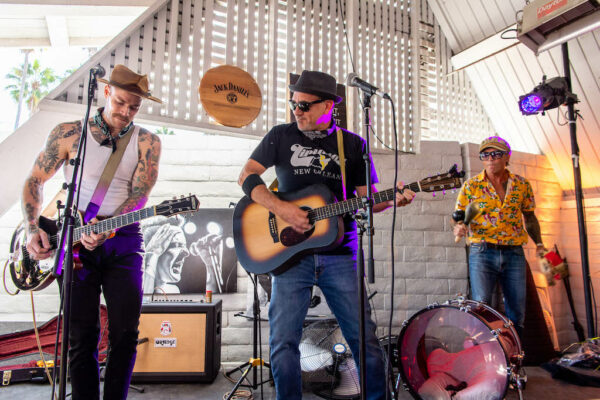 BeachLife, the weekend-long festival first held in 2019 in Seaside Lagoon to glowing reviews, returned this past September, after being canceled in 2020 because of the pandemic. Sellout crowds of 10,000 a day cheered Counting Crows, Jane’s Addiction and Ziggy and Stephen Marley on the main stage, while a new “Speakeasy” stage featured Pennywise’s Jim Lindberg, and other local acts playing acoustic sets. Concert organizers donated $72,000 to charity. 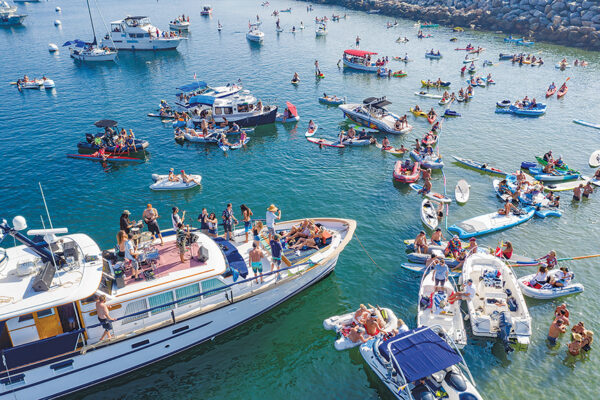 Boat Concerts, like this one by Bad Seeds aboard Estrella in 2020, are among the ideas under consideration for future amenities in King Harbor. Photo by Richard Podgurski (RP-Photography.com)

The first in a series of public input meetings about ways to improve King Harbor was conducted Dec. 15 by the L.A.-based landscape architecture firm, SWA Group.  SWA was hired to develop plans for improving  King Harbor’s Moonstone Park, Seaside Lagoon, the closed sportfishing pier, the hand launch dock, and the International Boardwalk. The firm has also been asked to identify a location for a boat launch.

“Based on what I’m hearing, that it’s charming, it’s local… I think people just want  to improve upon what is already there. To build on that DNA for inspiration.” SWA Group CEO Gerdo Aquino said at the conclusion of the meeting, 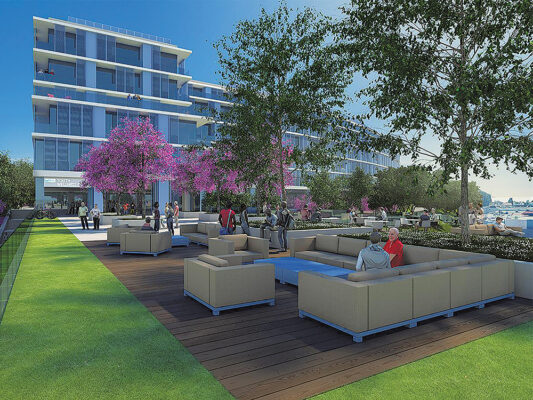 The Beach Cities Healthy Living Campus is meant to be a community gathering place. Rendering courtesy of BCHD

After four years of planning, and protests, the Beach Cities Health District Board of Trustees approved the environmental impact report for its Healthy Living Campus, in September. The BCHD commissioned a study in the fall, at a cost of $43,750, which concluded there is general public support for the $374 million, 11-acre project. The Healthy Living Campus would replace BCHD’s current facilities with 220 residential elder-care units, a new fitness gym, a demonstration kitchen and meeting and research facilities. A Youth Wellness Center is also proposed, along with 2.5 acres of open space for exercise classes and gatherings.

During the Sept. 8 virtual meeting, the board listened to callers’ comments and a dozen written submissions read into the meeting record.

All but one were in opposition to the project.

On the night of Aug. 25, a 36-year-old Long Beach man pulled out a handgun on the Redondo Beach Pier and began shooting. Two bystanders were wounded before police chased him to the boulders inside the horseshoe pier. He died after being fired at by four officers.

An all-night search, on March 6, by 12 South Bay police departments ended with four suspects being  apprehended, following a fatal shooting in South Redondo Beach. The victim died of multiple gunshot wounds. Officers arrived at the scene after calls came in about gunshots in the 600 block of North Juanita. The suspects fled in a vehicle, heading south on Prospect Avenue, then east into the neighborhood between Faye Lane and Susanna Avenue. They abandoned the vehicle and continued to flee on foot.

The four were caught after police set up a containment area between Prospect, Palos Verdes Boulevard, Torrance Boulevard and El Camino/Sepulveda Boulevards. ER